The Southwest Indian Ocean Region (SWIO) region is one of the most active areas in the world in terms of tropical cyclone formation. On average, 13 cyclone events with wind speeds exceeding 63 km/h form in SWIO region each year. High wind speeds are a key contributor to damage from tropical cyclones.

Developments in the SWIO region in 2019, including the devastating effects of cyclones Idai and Kenneth in Mozambique, led to a renewed country interest in parametric tropical cyclone (TC) insurance coverage. Consequently, the African Risk Capacity (ARC) Group developed a model capable of estimating the risk and economic losses due to TC events adapted to the SWIO countries such as Mozambique, Madagascar, Comoros, Mauritius, Seychelles, and Tanzania.

The ARC's TC model covers the hazards of wind, storm surge and wave damages while the effect of excess rainfall associated with cyclones will be covered under another ARC insurance product dedicated to flooding. The TC model is based on a stochastic database generated from historical events over 1500-years using storm tracks and intensity produced by the US Joint Typhoon Warning Centre for the period 1983-2013. The model combines characteristics of cyclone events hazard with exposure and vulnerability data to model the population affected and the economic losses. Using an insurance model and specific contract terms, exposure loss estimates are translated into loss estimates for a portfolio of assets. Payout begins at the trigger level set by the policyholder called attachment point.

After a satisfactory assessment in July 2020 by a Technical Review Forum (TRF) composed of TC experts from international institutions including the World Meteorological Organization (WMO), the ARC TC model was deemed ready and robust for operational use to track and model the impact of cyclone events in the SWIO region from the 2020-2021 season. Therefore, in November 2020, the ARC Group launched its new insurance product, the TC parametric insurance mechanism for SWIO region. The first of its kind in Africa, the TC insurance policy provides rapid financing facilitating early response to countries affected by tropical cyclones. Madagascar became the first country in the region to take out the ARC TC parametric insurance coverage, thanks to the KfW premium support for the 2020-2021 season.

The ARC TC model which is encapsulated into the Africa RiskView Tropical Cyclone Explorer (TCE) software, was used to monitor the cyclones Chalane and Eloise that hit Madagascar and Mozambique in December 2020 and January 2021 respectively. The damages of Chalane and Eloise estimated by the ARC TCE were in line with the preliminary damage assessments carried out by governments and local humanitarian organisations. 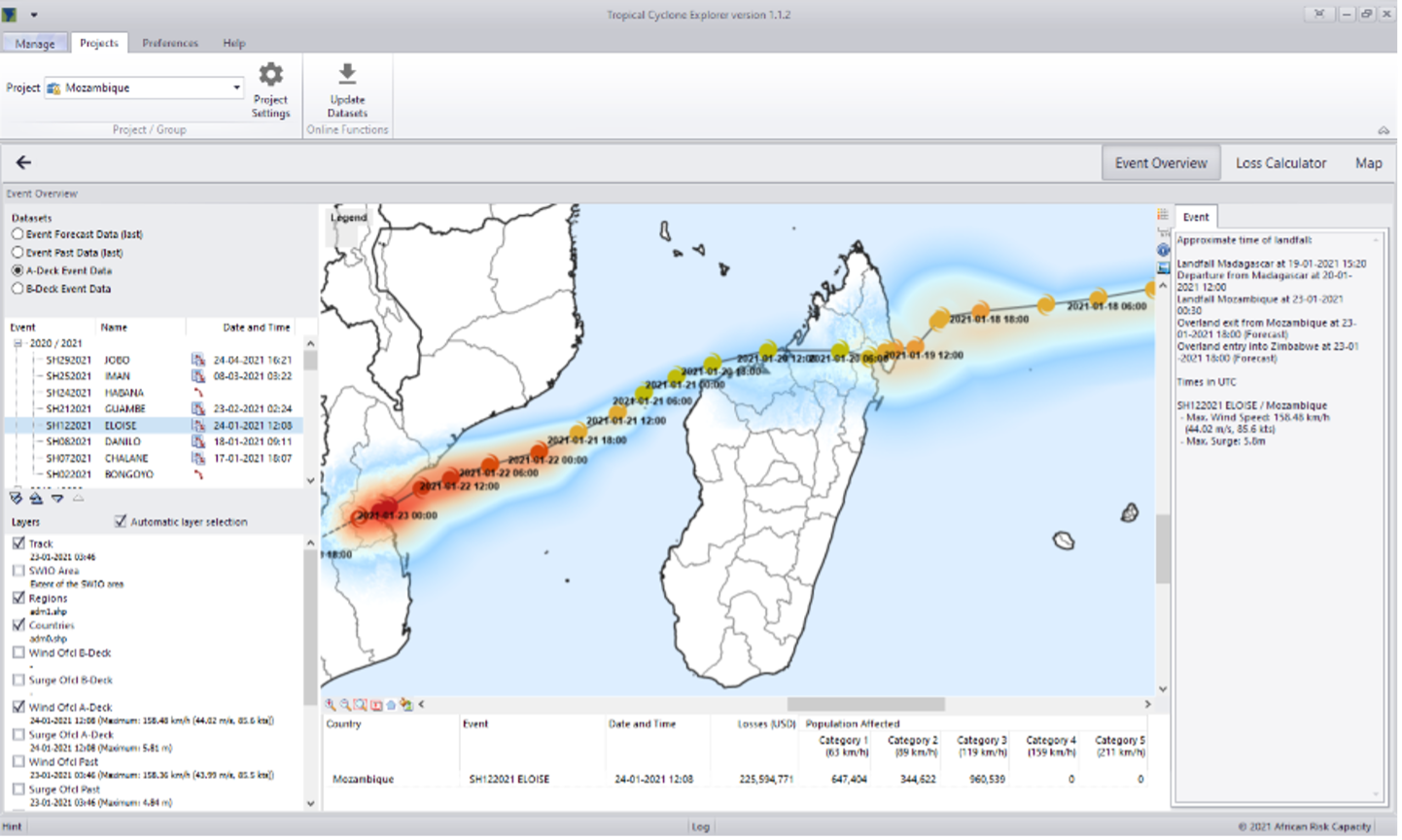 The ARC TCE software is available to countries via the ARC’s Africa RiskView platform (https://africariskview.org/).