In January 2012, the ARC commissioned a cost-benefit analysis (CBA) to examine the economic advantages and disadvantages of establishing a risk pooling facility as an early response mechanism to severe drought in sub-Saharan Africa. The work, undertaken by researchers from the University of Oxford and the International Food Policy Research Institute (IFPRI), was completed in June 2012, and serves as an important piece that adds new information and perspectives to the on-going discourse on disaster risk management in the context of food security for the continent. The study sheds new light on the value of early and predictable action in assisting those affected by livelihood shocks, such as drought, and the cost-effectiveness of scaling up existing in-country mechanisms to identify and respond to such needs.

Two major potential advantages of ARC are the provision of financing for the government and the enabling of early disbursement of emergency response services to those living in affected areas. Early disbursement of assistance derived from ARC participation could potentially provide higher welfare benefits to countries and their vulnerable households than traditional aid channels. To help assess these potential benefits, the CBA documents the existing evidence regarding the timing of household coping actions when faced with a drought and the likely long term cost impacts of these actions. From this baseline the study then estimates the economic costs of a delayed response per household by calculating the potential economic benefits in acting early and thus protecting a household’s economic growth potential. Simply put, that is intervening in time to prevent households’ negative coping actions such as reduced food consumption, livestock death, and distressed productive asset sales which, in the absence of external assistance, have increasingly pronounced negative consequences. 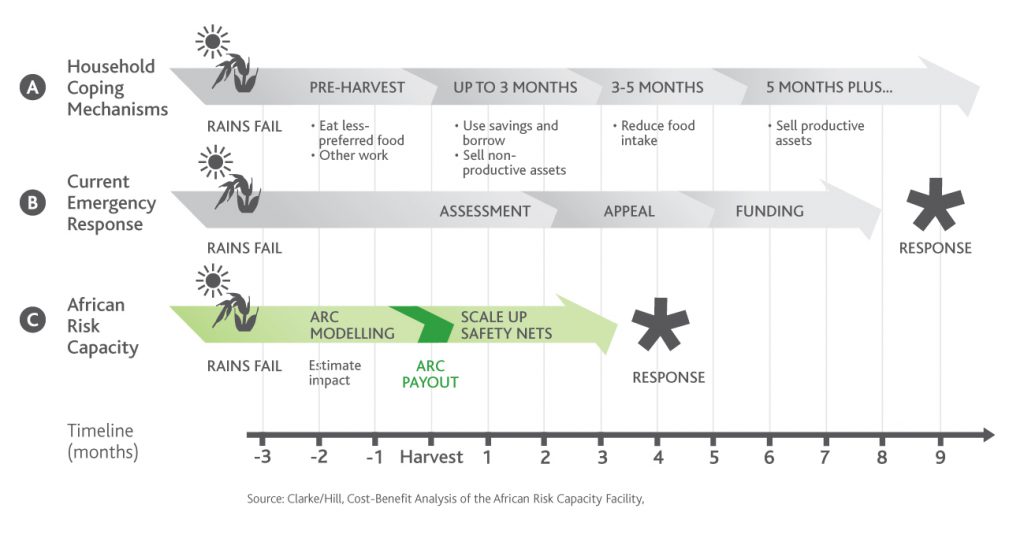 The CBA calculates the economic benefits of getting aid to households in the critical three months after harvest could result in nearly USD 1,300 per household assisted in terms of protected economic gains. Assuming conservative response cost and targeting estimates, the CBA indicates that response plans linked to ARC payouts could deliver a value of approximately USD 4.40 to households for every dollar invested in ARC, as a result of early response and improved national risk management through risk transfer and risk pooling.

Even though these estimates do not include the additional benefits of saving lives, nor direct cost savings, the study shows substantial speed, cost and targeting gains can be achieved through improved contingency planning. However, the study shows that the magnitude of benefits is much greater when the contingent plans involve scaling up existing programmes – such as safety net programmes – on account of both improved targeting and gains in speed. Conversely, an ARC payout plan that has no contingency planning, and therefore no speed advantages, offers no economic gains over traditional response mechanisms and therefore no benefits that would outweigh the cost of running a facility like ARC.