ARC’s Outbreaks and Epidemics (O&E) Programme was born in the wake of the devastating 2014-2016 West African Ebola crisis. The lessons from this outbreak revealed that, in addition to weaknesses in health systems, slow unpredictable funding was also a major contributing factor to the inability of affected countries to rapidly respond to the initial outbreak.

In its capacity as a Specialised Agency of the African Union (AU), ARC will be launching a sovereign parametric risk insurance product for outbreaks and epidemics as part of the AU’s response to infectious disease outbreaks of epidemic potential. For the last nine years, ARC has been successful in implementing climate and weather risk mitigation programmes for African countries through disaster risk management efforts and innovative financing solutions.

During the 2015  ARC Conference of Parties, Member States and African Ministers of Finance requested that the ARC Secretariat develop a product to address Africa’s financing and disaster risk management needs to enable early containment of high-consequence disease outbreaks. Subsequently, ARC initiated a research and development programme to establish the systems and funds needed to identify, contain and ultimately respond to outbreaks and epidemics. 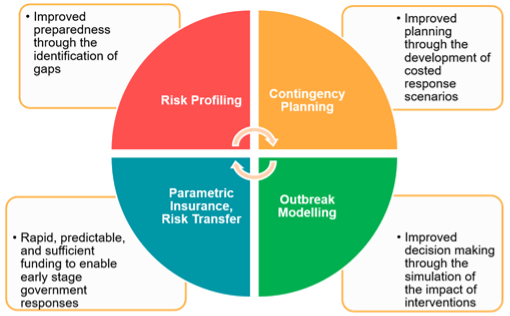 The O&E Programme comprises of in-country capacity building work on epidemic preparedness, contingency planning for timely and effective response to outbreaks, outbreak modelling to compute risk analytics from realistically simulated outbreaks events, and a risk transfer parametric product that will cover early response costs of an outbreak. In the case of an outbreak of a specific pre-agreed size, the product will provide payouts to the affected country.

The Programme is currently funded by The Rockefeller Foundation and the Swiss Agency for Development and Cooperation. It was successfully piloted in Guinea and Uganda in collaboration with various institutions highlighted below. ARC has built a partnership comprising of international organisations, donor and aid agencies, technical, academic and capital market players to advise, guide and support the development of the O&E risk insurance product. 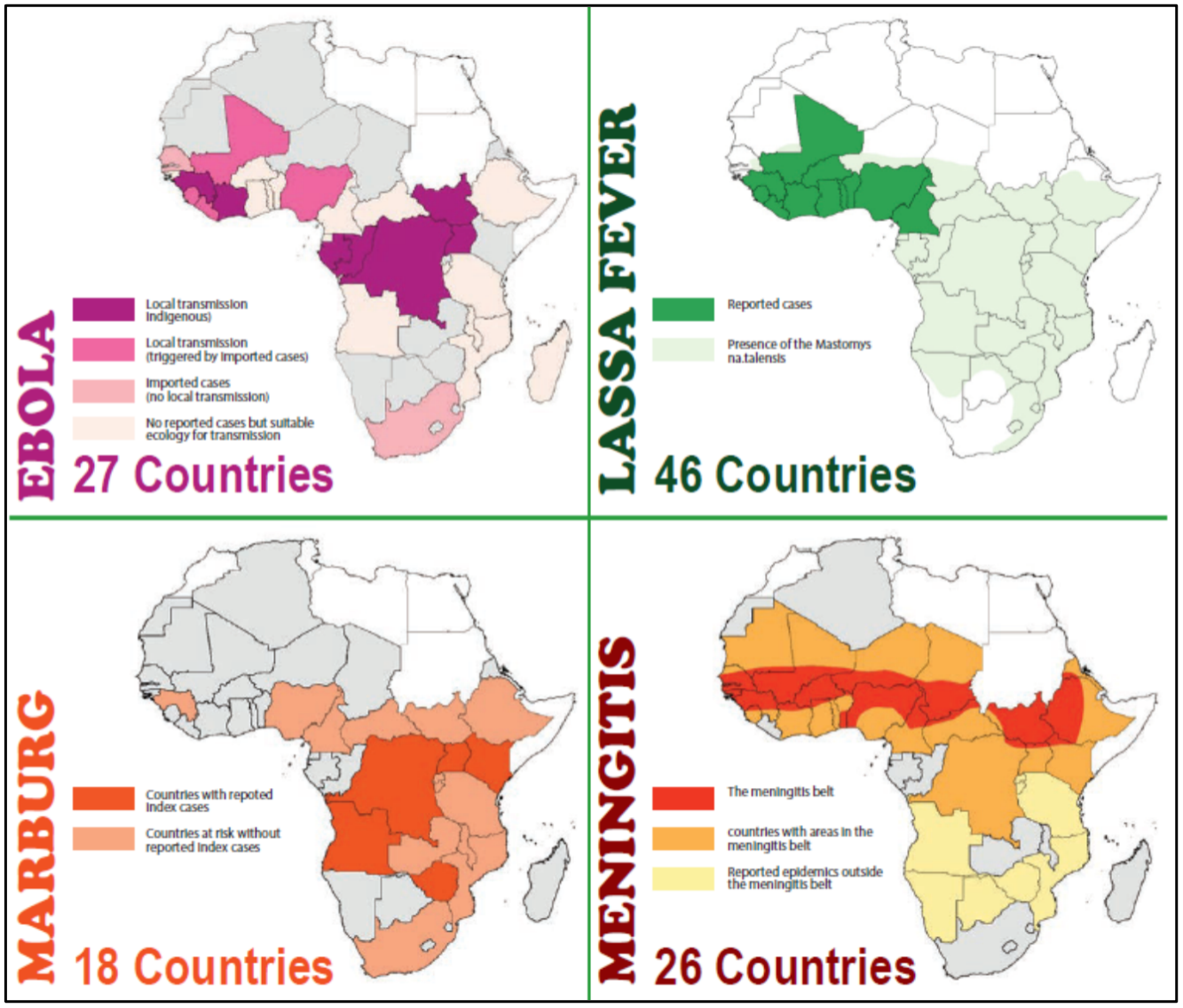 The objective of this product is to support countries to respond faster to such catastrophes. To start, four diseases with widespread coverage and economic impact have been selected. These diseases have proven human and economic costs, and have a history of destabilising economies and societies, should initial outbreaks be not arrested in a timely, efficient and effective manner.

The 2014-2016 Ebola outbreak in West Africa is a case in point. According to the World Bank, this outbreak resulted in over 11,000 deaths in Guinea, Sierra Leone and Liberia, with an estimated economic impact of USD $2.8 billion on the three countries. The 10th Ebola outbreak in DRC claimed over 2200 lives and had huge social, political, security and economic consequences.

The meningitis belt in Africa covers 26 countries and has an estimated population of approximately 300 million people. The region experiences large epidemic outbreaks in cycles lasting between 8 to 15 years , with an average incidence of 1,000 cases per 100,000 population. Lassa fever has an at-risk population estimated to be as high as 59 million, with an annual incidence of illness of three million in Sierra Leone, Guinea, and Nigeria. Similar to Ebola virus disease, Marburg virus disease (MVD) has a case fatality rate of around 50% and tends to have serious health and socio-economic effects on affected populations.

The importance of early investment and preparedness

It has been estimated that initiating an Ebola response to the West African epidemic two months earlier could have averted the fatalities in Sierra Leone and Liberia (3) by up to 80%. It is clear that several factors must come together to link preparedness to finance and response. The O&E product seeks to do just that, combining these key elements for successful outbreak control, and this means ensuring a balance between finance and systems.

According to the WHO, investing USD $28.9 billion in health emergencies preparedness and response would avert 1.5 million deaths and generate USD $240 billion in economic gains globally over the period 2019-2023. In addition, the rapid containment of acute outbreaks and the reduced need of resources for case management would generate USD $3.7 and USD $3.3 billion in cost savings respectively (4).

With its package of risk profiling, outbreak modeling, contingency planning, and risk transfer through a Cat bond, ARC aims to make outbreak response faster and more effective, and therefore limit the size and impact of outbreaks. This would in turn bring several benefits as follows:

The ARC Preparedness Index (ARC PI) was designed to fill the gaps of existing preparedness assessments by providing countries the strategic information necessary to guide pathogen-specific preparedness investments at national and subnational scales. This information is critical in the development of pathogen-specific contingency plans and disease spread models. The index measures both health and non-health systems related to outbreak detection, reporting, and response. The ARC PI is comprised of 7 domains; surveillance, response, laboratory capacity, risk communications, governance, financing, and infrastructure; 33 sub-domains; 68 components; and 158 indicators; and draws heavily on existing capacities such as the WHO’s Joint External Evaluation (JEE) tool.

(3) Source: NY Times ―How the Speed of Response Defined the Ebola Crisis‖; CDC ―Estimating the Future Number of Cases in the Ebola Epidemic — Liberia and Sierra Leone, 2014–2015‖; UN; WHO; The Guardian; BCG research & analysis.

The ARC PI will support outbreak’s response scenarios, guide countries in determining those response activities including the different sources of financial protection. Insurance is one of these elements and combined with ARC PI results will support decisions linked to the use of funds, capitalizing on the advantages of predictable and rapid intervention.

The O&E product will be a Catastrophe bond (Cat bond) to be issued by ARC (5), with beneficiaries being the sovereign African governments during a covered outbreak. The product is likely to trigger using a data index which is based on confirmed reported cumulative cases of infections. The ARC data index will be populated using WHO data, Ministries of Health data, outbreak situation reports, as well as Africa CDC /ARC subnational level data collected during the outbreak.

Product pricing and structuring require a credible stochastic model for disease spread. The model utilises multi-state stochastic modelling of population, given disease sparks from different locations. The model is then adjusted based on the country’s preparedness to deal with the outbreak, and finally, it is overlaid by modelling the impact of travel within a country and outside it via ground and air commuting. Modelling incorporates a country’s preparedness to deal with an outbreak which impacts the severity of the outbreak.

As previously mentioned, ARC has successfully piloted its O&E Programme in countries Guinea (Conakry) and Uganda since 2017. Since then, sub-national risk profiling and modelling work has been undertaken which has informed technical assistance provided in both countries during recent Ebola virus disease outbreaks. ARC aims to sign up several countries into the Catastrophe bond in the first 5 years of operation. Enrolment starts with in-country capacity building work to enable the tailoring of the Cat bond structure for the country in question. Countries will be prioritized against a number of criteria set from the ARC perspective such as the epidemiological profile, being and ARC member state with a signed MoU, and being exposed to at least 2 pathogens. It is expected that this plan may vary in future in terms of which countries get enrolled in the capacity building programme and signed up into the Cat bond based on demand or political considerations. 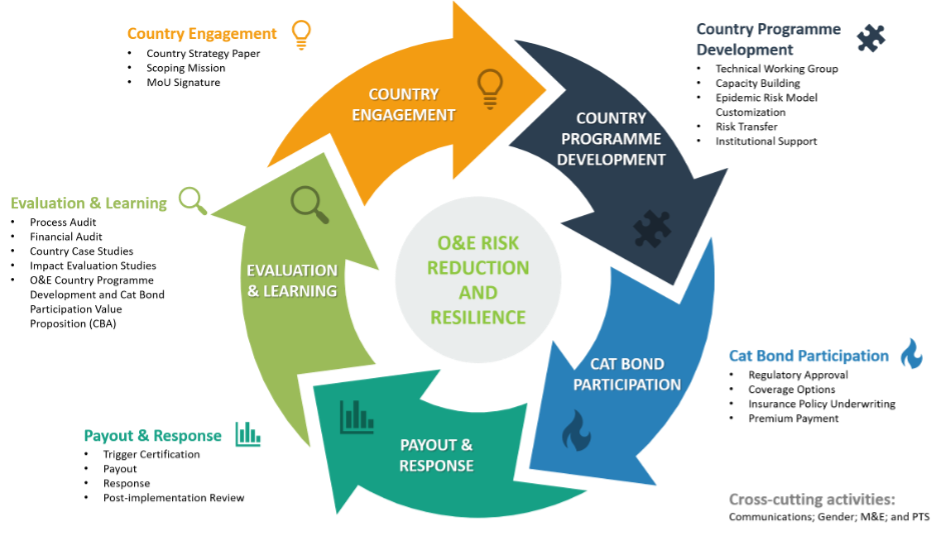 The Outbreaks and Epidemics (O&E) Programme and Product Development of the African Risk Capacity (ARC) is an innovative response, by Africa for Africa. Research shows that having inadequate preparedness and early response strategies to public health emergencies not only costs lives but also erases developmental gains. By targeting both Funding and Structures, ARC provides AU Member States with the necessary risk management and risk financing tools to respond to challenges posed by outbreaks and epidemics comprehensively and rapidly.