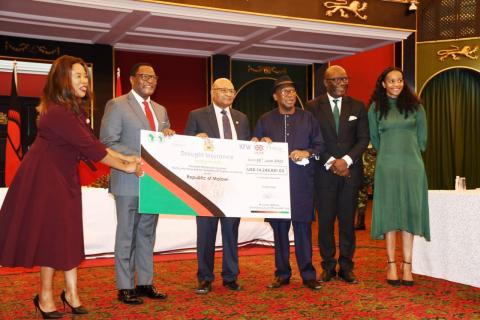 Lilongwe, Malawi 28 June 2022 – In a ceremony presided over by His Excellency, the President of the Republic of Malawi, Dr Lazarus McCarthy Chakwera, the Chairperson and Deputy Chairperson of the African Risk Capacity Group, in the presence of Representatives of Partners organisations (Ambassador of Germany to Malawi), and of the UN system (WFP and UNDP country directors), delivered a symbolic US$14.2 million insurance payout cheque to the Malawi Government.

“I assured Malawians that we have enough food for everyone and even those few whose crops had not done well would be provided for. My confidence came from the fact that we had taken this insurance policy to support Malawians in time of need. And I want to thank the ARC Group for honouring the agreed payout,” said His Excellency, Dr Lazarus McCarthy Chakwera, President of the Republic of Malawi.

The Government of Malawi had a drought insurance policy, supported by the African Development Bank through its Africa Disaster Risk Financing (ADRiFi) Programme Multi-Donor Trust Fund. Many regions of Malawi, particularly the Central and Southern regions, are experiencing severe food insecurity caused by drought-related events like erratic rainfall and crop failure.

During the 2020/21 season, the country experienced an unprecedented dry start to the production season, leading to higher rates of sowing failure in significant parts of the Southern and the Central Regions as modelled by Africa RiskView, the African Risk Capacity Group’s (ARC) risk modelling and early warning tool. This, combined with mid-season erratic rainfall conditions in most parts of the country resulted in a modelled number of people affected estimated at about 6.4 million, the second-highest number of affected people, since 2001.

“ARC’s drought insurance mechanism is an innovative pan-African tool that provides our member states with the funds needed to better plan, prepare and respond to climate-related disasters,” said ARC Group Board Chairperson, Dr. Anthony Mothae Maruping. “The payout to the Government of Malawi will not only release pressure on public finances but it will also bring nutritional and financial support to those that have been affected by the droughts caused by an increasingly variable and changing climate,” he added.

“Malawi is a signatory of the ARC Treaty and a key partner in the region. We have no doubt that the funds disbursed will support the country in scaling up its response to the drought-induced challenges,” said United Nations Assistant Secretary-General and ARC Group Director General, Ibrahima Cheikh Diong.

“ARC’s drought insurance product ensures the swift release of funds when they are needed most, allowing them to be channelled effectively to respond to a crisis. The most vulnerable in the country, who are facing severe hunger, will now have access to food relief,” declared Lesley Ndlovu, CEO of ARC Limited, the insurance affiliate of the ARC Group.

About the African Risk Capacity Group

The African Risk Capacity Group consists of ARC Agency and ARC Limited. ARC Agency was established in 2012 as a Specialized Agency of the African Union to help its Member States improve their capacities to better plan, prepare and respond to climate-related disasters. ARC Ltd is a mutual insurance facility providing risk transfer services to the Member States through risk pooling and access to reinsurance markets. ARC was established on the principle that investing in preparedness and early warning through an innovative financing approach is highly cost-effective and can save upward of four dollars for every dollar invested in ex-ante approaches.

With the support of the United Kingdom, Germany, Sweden, Switzerland, Canada, France, the European Union, the Rockefeller Foundation, and the United States, ARC assists the AU Member States in reducing the risk of loss and damage caused by extreme weather events affecting Africa’s populations by providing, through sovereign disaster risk insurance, targeted responses to natural disasters in a more timely, cost-effective, objective, and transparent manner. ARC is now using its expertise to help tackle some of the other most significant threats faced by the continent, including floods and outbreaks & epidemics.

Since 2014, 90 policies have been signed by the Member States for cumulative insurance coverage of US$900 million for the protection of 90 million vulnerable populations in participating countries.